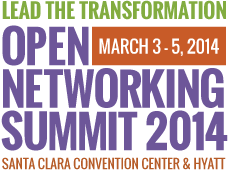 It appears as though SDN summit season is upon me. A few weeks back I was at the OpenDaylight Summit celebrating getting the Hydrogen release out the door. This coming week I’m going to be at the Open Networking Summit (ONS) which seems to have become the industry event for SDN in both the positive and negative ways.

If you’re going to be at ONS, you should be able to find me pretty easily. I’ll be at the OpenDaylight Developer Track Monday morning, manning the OpenDaylight booth/helpdesk on Monday and Tuesday evenings, and attending the Research Track most of the rest of the time.

If you’re curious what I do when I have my research hat on you can come see one of my summer interns present “Low-latency Network Monitoring via Oversubscribed Port Mirroring” where we show how to do traffic engineering in less than 4 milliseconds on current hardware and hopefully in 100s of microseconds with a few switch firmware changes. The talk is at 2:30p on Tuesday. 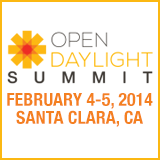 Turning back to the OpenDaylight Summit, I was stunned a how much interest there was with something like 600 people in attendance. I met a ton of people, though mostly only for a few minutes since I spent more time than I would have liked on stage as opposed to talking with people. You can find all the videos from the summit as a YouTube playlist. There’s a ton of good stuff there including demos of some of the projects, plans for future releases, and just general commentary. They’ve also posted most of the slides.

If your curious what I was talking about while I was there, I gave two talks and participated in a panel.

The first talk I gave was on “Consistency Trade-offs for SDN Controllers” where I went over some basics of distributed systems and what their implications were for building clustered SDN controllers. If you’re curious about HA and scale-out, give it a watch. The slides including some material I didn’t get to and references are online as well.

Along with Curt Beckmann of Brocade, I gave a talk on some work I did for the Open Networking Foundation’s Forwarding Abstractions Working Group, which Curt Chairs. I like to call it “Why OpenFlow 1.3+ won’t save us (by itself) and what OpenDaylight can do about it.” If you’re curious about OpenFlow 1.3 and what it means, go ahead and watch the video or look at the slides.

Lastly, I sat on a panel on the future of so called “Northbound Interfaces” to SDN controllers which I think was more interesting than I expected. SDNCentral even wrote an article about it.

The postings on this site are my own and don’t necessarily represent the positions, strategies or opinions of my current or former employers.